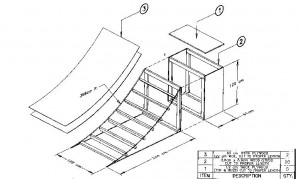 Archetypes: Very typical examples of one of the extreme boundaries of your game’s design.

Setups: Variously-sized groups of Archetypes, all combined together to ask the player a unique Question.

This week I’m going to introduce the subjects of “Intensity” and “Ramps,” which I’ll define later on. I’ll be developing these concepts further next week when I talk about how knowing about these helps you decide what Archetypes go in a Setup (see the previous article for more about Archetypes and Setups).

Before diving into the guts of this piece, I need to define a couple of terms.

First off, I’m going to be using the term “Difficulty” a little differently than most people do – and I want to be clear up front that it’s not what I’m talking about when I talk about Intensity. As with everything else in this series, I’m not doing this to imply that my way is somehow better or more correct. It’s just necessary that you understand how I’m using it here to avoid potential confusion.

“Difficulty”, as I use it, doesn’t really measure how hard content is for any given player. It measures the difference between players. For example, if you measure, say,  how long it takes different players to complete various levels and record how many times they died, you can know whether Level 1 in your game can be said to be objectively harder or easier than Level 1 in another game (at least in terms of those two things you’re measuring). Further, you’d be able to rank the players’ comparative skill in those areas, like with a leaderboard.

Difficulty: The objective difference in complexity or required skill between multiple games or players.

“Objective difference” is used to mean “the view from outside the player.”  It is externally comparative.

Difficulty is a very important aspect of game design, and I don’t want you to think I’m ignoring it. In this early-on phase of design, though, I don’t find it particularly useful to think about how objectively hard my content will be.

Early in the design process, I care most about how hard my content will be compared to the content that surrounds it. The word I use for that is “Intensity.”

Intensity – The subjective difference in complexity or required skill between different parts of the same game.

“Subjective difference” is used to mean “the view from inside the player.” For example, let’s say I created two levels (1 and 2), where the second level was supposed to be more Difficult than the first.

A pro gamer, a novice, or my dad would each have different subjective experiences of how hard those levels were, but if I’ve done my job right they would all agree that Level 2 is more Difficult than Level 1. Intensity measures the difference between Level 1 and Level 2 in terms of how hard it was for a given player.

Note that Intensity does not compare multiple players or various games to each other – it only takes into account one specific game and one specific player, namely: The player who is currently playing your game.

Pacing is the ratio of Intensity to Rest over the course of a segment of your game.

A great example of good pacing can be seen in the recent film Mad Max: Fury Road. Commonly described by reviewers as “a two hour long chase scene” – the movie nonetheless does a masterful job of balancing rest time for the viewers without destroying the forward momentum that makes that movie so great to watch.

The two most clever rests I can think of in that movie are:

Both are action packed and intense, but they mark a clear change of intensity and pace when compared to the surrounding scenes.

During the chase through the tornados, the audio fades down and everything seems to move in slow motion. The cars are still moving and getting ripped apart, but the intensity has died down – the viewer gets a rest.

In the “stuck in the mud” scene, the color palette changes abruptly to night and the motion of the cars actually stops for a while – but the action goes on. The characters are under threat, need to get out of the mud, and are being chased by an insane person. There’s even a cool explosion during this scene. And nevertheless it acts as a down-pacing moment. It gets you emotionally ready for the action that is to come, and makes that action (when it comes) feel much more intense by comparison.

This is a great example of the application of what I’m going to call “Principle #5”:

Principle #5: If it’s always “turned up to eleven,” eleven becomes the new five.

(I know I haven’t done Principles 3 and 4 yet, but I HAD to make this one either number 5 or number 11, and 5 was closest. The persons responsible for this decision have been sacked).

Intensity is the measure of your content as compared to other content that’s come before or to any future content in your game. This means that if I never change Intensity between the different segments of my game, my game essentially has zero Intensity. Even if objectively the whole game was brutally Difficult, players will not perceive any relative change from one segment to another.

Pertaining to games, this teaches us that if you want your players to feel a change in intensity at certain points, you have to let them rest beforehand so the change is noticeable. Going from intensity 5 to intensity 11 is a big jump, but going from 10 to 11 is not.

Jesse Schell, in his wonderful The Art of Game Design: A Book of Lenses shares an anecdote about when he learned the importance of pacing. He was working in a performing troupe and had just put on his first show. He went backstage and the head of the troupe, Mark Tripp, told them the show had been good, but not great. Their progression (pacing) had been off:

“It’s simple. You need to start with more of a bang — to get their attention. Then you back off, and do something a little smaller, to give them a chance to relax, and get to know you. Then you gradually build up with bigger and bigger routines, until you give them a grand finale that exceeds their expectations.”

From this experience, Dr. Schell developed the concept of “Interest Curves:”

Since my time at the amusement park, I have found myself using this technique again and again when designing games… The quality of an entertainment experience can be measured by the extent to which its unfolding sequence of events is able to hold a [player’s] interest.  The level of interest over the course of the experience can be plotted out in an interest curve.

What he calls an “interest curve” I’ve been calling “an intensity ramp” for much of my career. For the purposes of this article series we’ll use my term (to keep it easier for me) but you should know that he’s talking about exactly the same thing I am.

Intensity Ramp: The measure of relative intensity and complexity between the beginning of any segment of game content, and the end of it. Intensity ramps commonly start at low intensity and increase over the course of the segment.

Next time I’m going to show you a trick I use to create good pacing in my designs, including how to create good Intensity Ramps with well-spaced rest periods.

I’ll be explaining the trick in two contexts:

1) In terms of the combat system we’ve been creating. We’ll be fleshing out a bit more of what we’ve been working on for the last few articles and I’ll try to show how I answer one of the most common questions I get from Junior Designers — “How do I know what to design next and where to put it when I do?”

2) With examples showing how intensity ramps work in a published successful game (I’m thinking right now it’ll be The Talos Principle, which is a master-class in this kind of pacing).

As always, these articles wouldn’t be possible without my supporters on Patreon (http://www.patreon.com/mikedodgerstout):