My post on telegraphing enemy attacks, was about making an enemy telegraph before it attacks to ask the question: “Can you avoid my attack?”

This time we’ll be talking about a second question: “How can you defeat me?,” which is just as important to fun combat gameplay as the pre-attack telegraph. The form this question usually takes in games is a post-attack telegraph — a time when the enemy says, “Here I am, what are you gonna do about it?”

I’ll explain post-attack telegraphs more in a second, but first, I need to establish a new principle — one that I’ve been skirting around the edges of for a few articles now.

Remember Principle #1? “Designers ask questions and players answer the questions using the tools they are given.”

If players don’t understand the questions my game is asking, they can’t answer them. If the players can’t answer my questions, I’m not doing my job.

This cannot be understated: If your players don’t know a question is being asked, you might as well not be asking it.

Principle #6: If your players don’t know that something is in your game, then it’s not in your game.

If you’re making the kind of game where players can attack back at enemies, your enemies ask the player: “How can you defeat me?”

In the telegraphing article, I used this picture to describe the pre-attack telegraph, and the end state of a hypothetical sword attack: 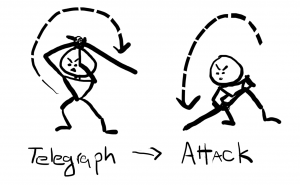 The classic post-attack telegraph in this situation would be for the swordsman in the image above to hesitate in the “attack” position for some amount of time (usually between 0.25 seconds and 1 second). If the player succeeded at avoiding the attack, this time window is the best time to strike back.

Another popular method is a short post-attack animation. For example, in Ratchet and Clank games, many enemies with guns will pause and play a short animation after firing a burst of shots. It’s common for the enemy to celebrate if its attack scores a hit, and to throw a small tantrum if the attack fails

What About “Realistic” Games?

In describing the methods above, I often get asked what to do in a “more realistic, less gamey” situation. The answer is simple:

Principle #7: If you want your AI to look smart, have it announce its stupidity.

If you look at games like Uncharted, F.E.A.R., or other popular more “realistic” styled games, you’ll notice that enemies are constantly talking to you. This makes things feel immersive, of course, but it also serves a secondary hidden purpose.

If the enemy can’t pathfind its way to the player, or can’t get into a position to shoot the player, it might shout out, “Be advised, we have lost visual contact with the suspect!” or whatever.

If the player throws a grenade, and we don’t want the AI to look stupid standing there next to the grenade, but also don’t want to have them dive away and thus make grenades useless — one of them might shout “grenade!” In F.E.A.R, one of the designers told me, occasionally one of the enemeis shouts “grenade!” and then jumps on the grenade, dying but shielding all its allies.

So how does this all relate to post-attack vulnerability? Simple:

Won’t This Make the Game too Easy?

No, this won’t make the game too easy. When people visualize enemies doing this, they usually visualize the player and a single enemy facing off on a flat plane. That would be too easy. 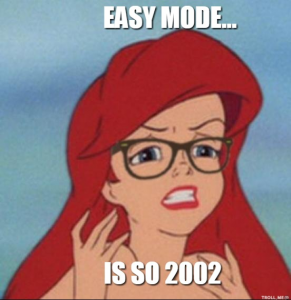 As I discussed in my article on Setups, this should rarely be what the player sees. By the time you’ve added multiple instances of that same enemy (each of which is firing, hiding, or vulnerable at a different time than the others), or combined it with instances of other enemy types, the situation doesn’t look as simple as it did before.

However, in all that chaos, players will still be able to notice those vulnerable moments (thanks to you calling them out) and will be able to pick them off in the ways you intend, using the tools you’ve given them and their skill.

« Reward Schedules
Learning from other Media »